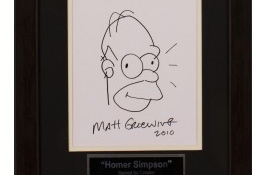 Hand-Drawn and Autographed by: Matt Groening
Homer Jay Simpson is a fictional main character who appears in the animated television series The Simpsons as the patriarch of the eponymous family. He is voiced by Dan Castellaneta.
Matt Groening’s Simpsons family are named for the members after his own parents and sisters — while Bart was an anagram of the word brat. The shorts would be spun off into their own series: The Simpsons, which has since aired 530 episodes. Groening has won 12 Primetime Emmy Awards, ten for The Simpsons and two for Futurama as well as a British Comedy Award for “outstanding contribution to comedy” in 2004. In 2002, he won the National Cartoonist Society Reuben Award for his work on Life in Hell. He received a star on the Hollywood Walk of Fame on February 14, 2012.