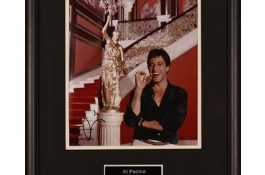 Scarface was a remake of an original 1932 film by Howard Hawk; the story of drug kingpin Tony Montana and the rise of his empire in the cocaine boom of the 1980s initially earned mixed reviews from critics. Despite initial criticism for its extreme violence, profanity, and drug usage, the film ended up being a box office success earning $65.4 million worldwide. The movie was ranked by the American Film Institute as one of the top ten gangster movies of all-time, as well as being ranked among the 500 greatest films of all-time by Empire Magazine.