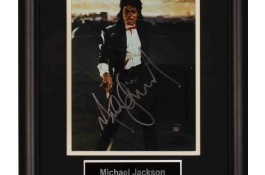 Autographed by: Michael Jackson
The King of Pop was named Artist of the Century at the American Music Awards as well as Best-Selling Pop Male Artist of the Millennium at the World Music Awards. He won a total of 392 awards in his career, including a Grammy Legend award and a Grammy Lifetime Achievement Award. He’s had 13 number one singles in the US, his album Thriller is the best-selling album of all time, and he’s sold close to 750 million albums worldwide in his career. Michael was inducted into the Songwriters Hall of Fame in 2002, and the Rock and Roll Hall of Fame twice as both a member of the Jackson Five and as a solo artist. Jackson became the first artist in history to have a top ten single in the Billboard Top 100 in five different decades when “Love Never Felt So Good” reached number nine on May 21, 2014.