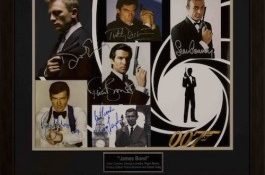 Autographed by: Sean Connery, Daniel Craig, Pierce Brosnan, Roger Moore, Timothy Dalton and George Lazenby
Ian Fleming’s series of novels depicting a secret British agent, 007 (James Bond), have made quite the splash on the big screen. Since the first film in 1962, there have been six different actors who have played Bond in over 20 different films. The series has brought in over $12 billion in revenue at the box offices, making it one of the most profitable film series of all-time.