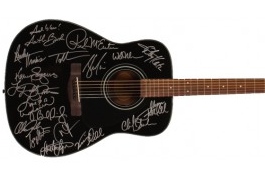 Autographed by: Garth Brooks, Reba McIntyre, Faith Hill, Tim McGraw, Brad Paisley, Vince Gill, Toby Keith, Randy Travis, Clint Black, Wynonna Judd, Dolly Parton, Kenny Rogers, George Strait, Loretta Lynn, Dwight Yoakem, Shania Twain, Alan Jackson and Willie Nelson
This Country Legends guitar is autographed by 18 of the most influential country music stars to date. This guitar has the autographs of musical sensations for every decade of country, from stars popular in the 60’s to stars popular today. Each of the musicians on this guitar helped shape the country music genre to how it is today. The unique aspect of this piece is that all eighteen of these artists had their own spin on country music, none of their songs sounded the same, but the popularity that each attained made country music grow as a single genre.