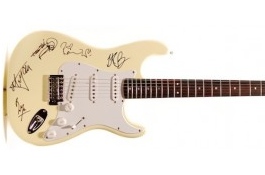 Autographed by: Mick Jagger, Keith Richards, Charlie Watts, Ronnie Wood and Bill Wyman
This English rock group came on the scene back in the 1960s and rocked the music industry for decades to follow. With over 20 studio albums produced and 200 million albums sold worldwide, it’s no surprise they were ranked as the 4th Greatest Artists of All-Time by Rolling Stone (both the magazine and band were named after Muddy Water’s song, “Rollin’ Stone”). They won a Grammy Lifetime Achievement Award in 1987 and were inducted into the Rock and Roll Hall of Fame in 1989. In 2012, they celebrated their 50th Anniversary with the release of new Greatest Hits album GRRR! featuring two new singles including chart hit Doom and Gloom. In 2013, along with Arctic Monkeys and Mumford & Sons they headlined Glastonbury.