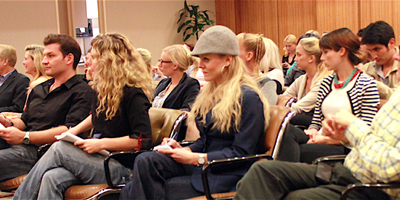 Scandiwood was a great success.  The room was filled with enthusiastic people, eager to learn more about the entertainment business.  The panelist shared their thoughts on how the entertainment industry works today and gave the audience useful advice based on personal experience from his or her own career.  After the seminar it seemed like no one wanted to leave because the panel and the guests had so much fun mingling.  We want to thank the panelist and everyone who joined us at  Scandiwood!

The audience listens carefully to what the panelists had to say about the entertainment industry.  The audience included producers, financiers, actors, writers, talent managers and students among others.

Our guest certainly enjoyed each other’s company.  We offered our guests a buffet and beverages.
Photos courtesy of Richard Laurits (richard@laurits.se)