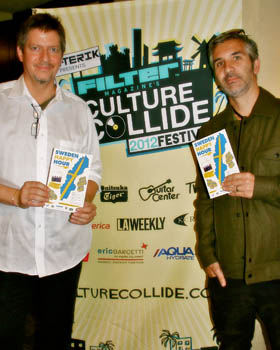 We would like to thank everyone attending “Sweden Happy Hour” at TAIX Saturday night! It was an amazing event!

The evening started off with a short introduction of SACC-LA presented by our fabulous president Gudrun Giddings, continued with the magic DJ duo Icona Pop, followed by an informative speech about the Swedish music industry presented by Erik Nowacki from the Consulate of Sweden and fantastic live music performed by the band Immanu El.  The crowd, a cool mix of Americans and Swedes, enjoyed free beers and great music for two hours and also had the opportunity to mingle and take photos with the bands.  SACC-LA’s board members Björn Barnekow, Anna Kolber, Amir Maki and Jennings Segura showed up and had a great time togehter with the Swedish singer Jennifer Åkerman, Mike Bell from FILTER Magazine and Rachel Komar representing Extension Music.

Erik Nowacki, Honorary Consul at the Consulate of Sweden in San Diego.