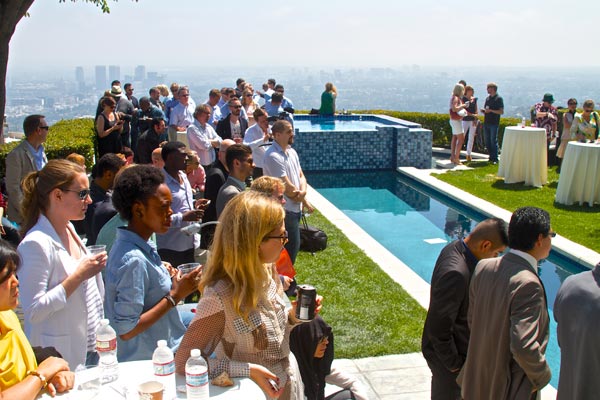 The Swedish Affair Pop-Up 2016 is a two-day event that will take place during the week of E3 and host the most cutting-edge and innovative, creative people and businesses from Sweden.

During the first day of the Swedish Affair Pop Up major corporations like Visit Sweden and Scandinavian Airlines will present their newest technology and creative business ideas. There will be art and photography displays by Swedish artists Jenny Sandersson and Per Bernal and beautiful imagery of Stockholm – the capital of Sweden, cutting edge panel discussions about the future in technology within the creative spaces and lastly a VIP kick off party featuring live performances and a chance to win a weekend package including round trip tickets with SAS Go and a stay at the Nordic Light Hotel in Stockholm!

WHERE: Skybar and Cabanas at the Luxury Mondrian hotel ,West Hollywood

WHEN: Tuesday June 14th 2016 –In collaboration with Skybar’s “Tunesday” a concept with live acoustic music

The beautifully designed hotel pool, set flush with the surrounding teak deck and featuring underwater music, is the perfect spot for soaking up the sun while enjoying the stunning panoramic views and upbeat vibes of Los Angeles. By day, the lushly landscaped Outdoor Living Room brims with flowering vines and comfortable teak and wicker furniture, making this a chic go-to oasis for enjoying impeccably fresh cocktails with a lively and fun atmosphere. With the setting sun, the pool lights up with hundreds of flickering lanterns placed around the deck and hanging from the boughs of trees, transforming the pool into an vigorously energetic setting to take in the best of Hollywood glamour. The Outdoor Living Room is also available for private events.

Aida Hadzialic is the youngest-ever Minister in the Swedish Government! The 27- year old Bosnian Muslim immigrant to Sweden is the Minister for Education for the new Secondary and Upper School and the Adult Education Initiative. As a social democrat, Aida became the Deputy Mayor of Halmstad at the young age of 23. Aida has featured 10th in the list of 100 most influential people of Sweden. Her name was mentioned in the 101 ‘Super talented Swedes’ published in the Swedish business journal Veckans Affärer.

“I have always been an artist in one way or another. Working as a hairstylist for world famous Toni&Guy as a top hairstylist taught me about shape, texture, balance and colors. Later I started painting abstract in my small apartment in Sweden. I found something new and people around me gave it attention. After awhile I had my art on walls in stores and homes. Moving to LA was a big change but the interest for art followed me there. I kept on painting and soon it got discovered even in the States.  I paint with acrylic and spray paint. I use a lot of gold leaf to give my abstract street art a touch of glamour. I love graffiti and street art. Colorful, urban and industrial. I get my inspiration from the streets and I want to bring that feeling onto a canvas and into the galleries.”

Billy Morrison has been a long time collector of contemporary art, owning pieces by Andy Warhol, Jamie Reid, Shepard Fairey, Banksy, Risk, and many more. He considers himself fortunate to be able to express himself creatively on canvas, as well as through his music. His provocative and thought-inspiring statements embrace concepts of duality and mixed metaphors, and his use of color and mixed media has been embraced by both the music and art worlds and pieces are owned by Shepard Fairey, Sharon Osbourne, Craig Susser, Sydney Holland and other influential collectors. Morrison has a piece from his Butterfly series hanging in the US Capitol in Washington, D.C.

Per Bernal is recognized as one of the world’s premier physique photographers for the past 30 years. He has garnered a reputation and prowess for capturing the nuances of physical perfection, thus creating striking images of modern day heroes and role models. His work has graced the covers of more than 400 magazines world wide including; Esquire, FHM, Shape, Men ́s Fitness, Muscle & Fitness & Flex, and has also shot for 1000’s of articles.  Originally from Stockholm, Sweden, Per Bernal is now resides in Los Angeles, California, where he has worked with clients such as Samuel Goldwyn Films, NBC,  LionsGate Entertainment, World Wrestling Entertainment, WWE Studios,  American Media,  Advance Research Media, Bonnier Publishing, Penguin Putnam Books and Rodale Inc.

Mr. Bernal is represented by Megan Phillips of Sur le Mur. Ms. Phillips is honored and pleased to be presenting Mr. Bernal’s highly anticipated solo show in the world of Fine Art Photography.

Photo by Per Bernal

Swedish-Kenyan beauty, Beldina Malaika’s talent is as rare and beautiful as her multi-cultural background. Her second name, Malaika (“angel” in Swahili) was appropriately passed down to her from her late grandmother. In the words of MTV Iggy, Beldina’s “pop angel pipes” carries over any beat. Her first love is music. She has studied classical and jazz piano, gospel choir, opera and dance, and by age 9, she was the lead singer and drummer of her own band. By high school, she was on the road to becoming a local legend, taking her own solo material to perform at venues all over Sweden. And it wasn’t too long afterwords that her live shows took her around the world from LA to Tokyo.

Beldina has worked with a wealth of varied artists that span generations including Stevie Wonder (performing as his handpicked vocalist), Vic Mensa, Mando Diao, Billy Paul, The Cataracs, and Pharrell (opened up for him on his “Dear Girl Tour”) to name a few. Beldina’s experience has made her a powerful vocalist and an exceptional performer with a dynamic stage presence.

The winner will be the one who shares the most creative and fun Sweden-inspired photo, taken during The Swedish Affair 2016, on Instagram with the hashtag #SACCLASAS as well as tag @sacc_la in the picture ! Also, make sure to change your Instagram account to public during the time of the competition if you currently have a private Instagram account. The pictures have to be posted between 3.30PM and 10PM. The winning picture will be selected by a secret jury and announced at 10PM! The winner will be notified via Instagram if no longer at the event.

On the second and last day of The Swedish Affair, a screening of “Skin Trade” will take place at Fox Studios, attended by exclusively invited VIPs, followed by a Q&A with the star and producer Dolph Lundgren. “Skin Trade” lifts the subject of human trafficking in collaboration with charities CAST (Coalition to Abolish Slavery and Trafficking) and the Mentor Foundation USA to raise awareness about human trafficking and drug abuse.

Twentieth Century Fox is an American film studio, distributor and one of the six major American film studios. Located in the Century City area of Los Angeles, just west of Beverly Hills, the studio is currently owned by 21st Century Fox. 20th Century Fox has distributed famous film series, including the first two Star Wars trilogies, X-Men, Die Hard,Home Alone, Planet of the Apes, Night at the Museum, Taken, The Omen, Alien, and Alvin and the Chipmunks. The studio is also credited for distributing James Cameron’s Avatar and Titanic, the highest and second highest grossing films respectively at the box-office.

Dolph Lundgren is a versatile Hollywood figure, Dolph wears multiple hats in the entertainment industry as an actor, film director, and martial artist. Lundgren’s breakthrough came when he starred in Rocky IV in 1985 as the imposing Russian boxer Ivan Drago. Since then, he has starred in more than 40 movies, almost all of them in the action genre.

With nothing but vengeance to live for, detective Nick Cassidy (Dolph Lundgren) ransacks his way through the Bangkok underworld in pursuit of Viktor Dragovic (Ron Perlman), the human trafficker who attempted to kill his family. As the crossfire grows more deadly, FBI Agent Eddie Reed (Michael Jai White) is sent to bring Nick home, while Thai detective Tony Vitayakui (Tony Jaa) questions the motives and methods that have brought Nick across the globe. Through dire circumstances, detectives Cassidy and Vitayakui must come together to destroy Dragovic’s human trafficking network.

The Swedish Affair 2013 from SACC-LA on Vimeo.

The Swedish Affair 2012 from SACC-LA on Vimeo.
“The Swedish Affair really confirmed how many interesting and talented Swedish projects our country has. I was surprisingly overwhelmed by the great interest that I received. To think that one has to travel across the globe to realize how much our small country can accomplish.”
Anna Serner, CEO, Swedish Film Institute
“The Swedish Affair was inventive and innovative – it was such a pleasure to be a part of this amazing event with a“truly“inspiring group of individuals. “I take pride in bringing the Swedish culture to Los Angeles and as a designer, I actively promote the need for our creative industry”
Isabel Adrian, Fashion Designer
“I really enjoyed the Swedish Affair – from the outdoor panels and bands in the backyard with the pool and amazing views, to the delicious smorgasbord of food inside, to the great conversations with tech and entertainment attendees. Very classy, great people and great fun”
Kevin Winston, Founder, Digital LA
The Swedish Affär is an annual event that is all about celebrating creativity and innovation. The event concept was developed for Swedish companies and talent in the forefront of innovation and creativity, mainly because of the apparent potential these industries have in Los Angeles and Hollywood due to already huge success. The purpose is to highlight these companies and individual talent in the U.S. market, create meetings between relevant parties and business opportunities that will increase the trade between Sweden and the U.S.
The idea of The Swedish Affär concept is to create a meeting place in a laid-back atmosphere where one is allowed to practice the art of being. A place to hang out, talk to new and old friends, network and meet new business partners, listen to brilliant speakers and artists and then sit down next to them and continue the conversation, while enjoying Swedish hospitality, food and drinks.

The Swedish Affär event takes place right before the international gaming expo E3 in Los Angeles. The first year, it was held at the fashionable Lloyd Wright-designed Sowden House in Los Feliz. The second year it was held at the amazing Rockstar Mansion in Hollywood Hills. The Swedish Affär attracts over 800 guests: among them prominent Swedish and American companies and talent within film, television, games, music, fashion and advertising industries, along with investors and Hollywood agents.
The Swedish-American Chamber of Commerce of Los Angeles, the Swedish Games Industry and Media Evolution organized the event together with the Swedish Ministry for Foreign Affairs, the Swedish Institute, the Swedish Embassy, the Swedish trade organizations for games, music, fashion, film, television and communication/advertising and private companies.
www.theswedishaffair.com

Jennifer Åkerman and the band Bella Tech performing at The Swedish Affär.