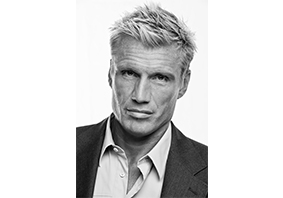 Dolph Lundgren BIO
Hans Dolph Lundgren was born and raised in Stockholm, Sweden.  After high school he decided to follow in his father’s and older brother’s cerebral footsteps and pursue an engineering degree.     The same year he graduated he met the exotic singer Grace Jones and fell in love.  He decided to move to New York City and take up modeling to make some extra cash.  A bit too muscular for a model’s size 40, Dolph was to begin at MIT a few months later.  On a friend’s advice: “Hey man, you look like you should be in the movies”…this is where it all began.
His motion picture debut came in the James Bond feature “A View To Kill” in 1985.  However, it was Dolph’s memorable performance in ROCKY IV later that year that definitely got him noticed worldwide.  Dolph grit his teeth and managed to build quite a career as an international action-hero and has since starred in more than 40 feature films.
Throughout the years, Dolph has always stayed close to the martial arts.  In 1997 Dolph was awarded his third degree black belt by the World Karate Organization in Tokyo.  His other athletic accomplishments include being the captain of the Swedish National Karate Team and the individual champion of the Swedish, European and Australian Heavyweight Full Contact Divisions.  In addition to his Karate expertise, Dolph was selected by the U.S. Olympic Committee to serve as the Team Leader of the U.S. Olympic Pentathlon Team during the 1996 Atlanta Olympic Games.
As well as being a seasoned actor, Dolph has directed five feature films.  His production companies Thor Pictures and Red Orm Productions are currently developing several projects, in which he will produce, star and direct.
In early 2012, Dolph also wrapped “The Expendables 2,” written and directed by Sylvester Stallone.
Read the full bio at www.dolphlundgren.com