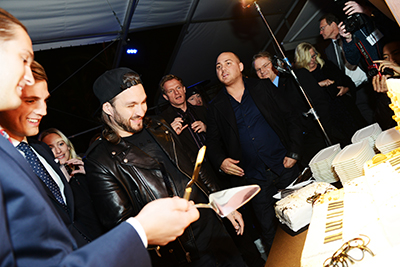 Over 700 guests joined us on November 22nd on the W Hollywood Hotel Rooftop to celebrate award winner and birthday boy Steve Angello when he was receiving the Eliason Merit Award 2013.  After the guests arrived and had their photos taken on the red carpet they went up to the rooftop where they could enjoy the open bar, Swedish inspired hors d’oeuvres and a spectacular view over Hollywood.  Since SACC-LA focus on innovation and creativity the guests represented industries such as film, music, television, games, fashion, design, food, advertising/communication and new digital technology.  We are happy to see that the annual Eliason Merit Award Gala has become a hot spot for Swedish-American creative talent.

SACC-LA’s President Gudrun Giddings held the award ceremony and introduced the award winner 2013 by showing some highlights from Steve’s career:

Video Made by Rebels Studios Production. Watch on Vimeo

Steve also received a video greeting on stage from last years winner, Dolph Lundgren.  Dolph congratulated Steve to the award and emphasized on Steve’s charity work through SIZE Foundation.  Dolph finished by saying that he hoped that Steve would have a just as fun night as he had at the previous Eliason gala.
Since November 22nd also happened to be Steve’s birthday the award ceremony ended with everyone in the audience singing the Swedish Happy Birthday song – “Ja må han leva”.

When the doors to the after party opened and DJ MRTN started playing the line of excited after party guests were already long.  After MRTN had warmed up the crowd and Rebecca and Fiona entered the DJ booth, the dance floor was on fire. The headliner, Third Party, started playing around 12.30pm and kept the party going until the early hours.  With free Kanon Organic Vodka and Pistonhead Beer throughout the night, fantastic music and a great crowd of people the success of the after party was a fact.

For more photos please check out our Facebook page where you both can find all the pictures from the red carpet and the Award Show and After Party.
We would like to thank our Sponsors: Kanon Organic Vodka, Pistonhead,Embassy of Sweden, Bad Taste Records, Rec Solar Phosworks, Dice,Rebels, Anine Bing, Ioaku, Art Unified, Linnea Strid, Karen Bystedt, Odd Molly, Trina Turk, Kool Kojak, Moods of Norway, Apica, Ingri Dahl, Blue Microphones, Layers & Co.

Also big thank you to the Kerstin Alm, Oscar Nilsson and the crew at Phosworks for taking photos during the event, and to all our volunteers who were truly amazing. Thank you!