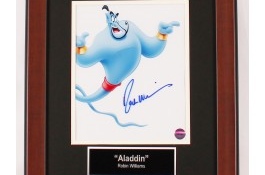 Autographed by: Robin Williams
Aladdin is a 1992 American animated musical fantasy film produced by Walt Disney Feature Animation and released by Walt Disney Pictures. Aladdin is the 31st animated feature in the Walt Disney Animated Classics series, and was part of the Disney film era known as the Disney Renaissance.
Aladdin was released on November 25, 1992 to positive reviews and was the most successful film of 1992, earning over $217 million in the United States, and over $504 million worldwide. The film also won many awards, most of them for its soundtrack. Aladdin’s success led to other material inspired by the film, including two direct-to-video sequels, The Return of Jafar and Aladdin and the King of Thieves; an animated television series; toys, video games, spin-offs, and Disney merchandise. A Broadway adaptation debuted in 2014.