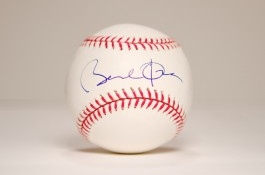 Autographed by: Barack Obama
Barack Obama is the 44th President of the United States, and the first African American to hold the position. Obama attended Columbia University and Harvard Law School and taught law at The University of Chicago Law School from 1992 until 2004. He was elected Senator of Illinois in 2005, before completing a successful presidential campaign based on “change” in 2008. In 2009, Barack became the fourth US President to receive the Nobel Peace Prize “for his extraordinary efforts to strengthen international diplomacy and cooperation between peoples.”